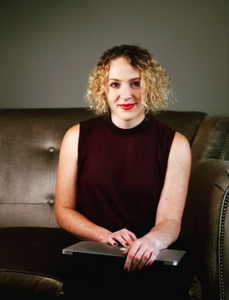 Climate change creates a sense of urgency and uncertainty for many. But for climate journalist Emily Atkin, her frustration over the response to the crisis speaks to another emotion: anger. “Anger about the inaction and injustices behind this crisis is a key emotion in fighting the major forces that have been preventing climate action for the last 30 years,” says Atkin, an alumna of Metcalf Institute’s 2015 Climate Change and the News: Planning and Response seminar. That anger gave birth to Heated, an online newsletter she created in 2019 “for those who are pissed off about climate change.”

Atkin says she produces the newsletter for those who question why more action is not being taken to address major climate change impacts. “I want Heated to expose and explain the forces behind past and present inaction on the most existential threat of our time,” states Atkin. “People are dying and suffering, and we can only expect more of this in the future.”

Atkin received a B.A. in journalism from the State University of New York (SUNY) at New Paltz. She began her career reporting for the Legislative Gazette, a New York-based newspaper focused on politics and policy issues. She also worked as a research assistant for the late Wayne Barrett, a widely-respected investigative reporter for the Village Voice, who served as an important mentor for her. Atkin went on to work for Think Progress as a climate reporter and deputy editor where she managed a team of reporters and traveled across the country covering environmental and political issues. “After working a range of political scenes, I was still interested in political journalism but wanted to produce coverage that was more meaningful,” explains Atkin.

This led her to the New Republic and a focus on climate reporting. “Climate change is the most important and interesting story a journalist can cover,” says Atkin, a move she calls an important prerequisite for starting Heated. “Working for the magazine helped give me the courage I needed to express my own approach to climate journalism through my own outlet.”

Atkin also values the connections she made with other journalists at Metcalf Institute’s 2015 Climate Change and the News Science Seminar, which she calls “the most lasting and memorable impacts of my participation with Metcalf.” The Metcalf Seminar “was my first gathering with other environmental journalists and it laid the foundation for a career’s worth of networking, meeting people, and building relationships within environmental reporting.” Having associations with other journalists, who recommended Atkin as a trustworthy source, boosted the newsletter’s reputation. “Along with building trust and a foundation with your readership, connections with other journalists are essential to having a successful career,” she states. “Journalists rely on each other to lend credibility.

Atkin says Heated has had a significant impact on readers’ attitudes about climate change, in some cases resulting in policy changes. For example, Atkin published a story in Heated about Twitter banning ads that promoted climate action, but allowing fossil-fuel industries to place ads that rejected climate change. Atkin recalls this story generating so much outrage and strong reactions that Twitter changed its policy. “Heated has justified the value of and the force of accountability reporting,” says Atkin, who adds that many of her readers say they are now much more confident about discussing climate change. “It can actually make a difference!”

She says Heated prompted some of those readers to get involved in climate activism or start their own initiatives. “Heated has created a community of people who rely on it to be better-informed citizens,” she says. “This is the most important thing journalism can do: create an informed public.”

In addition to publishing Heated, Atkin also teaches a climate journalism course at SUNY New Paltz. As for the future of Heated, she has high hopes for the newsletter’s continued success and envisions expanding the publication beyond a newsletter in the future. “I want to use the latter part of my career to mentor and teach journalists, especially journalists from underserved populations,” she explains. “It was an important part of my education to learn from great professors who had careers as journalists, so I want to give back what they gave to me.”

Written by Gabriella Placido. She’s in her second year of a URI College of the Environment and Life Sciences (CELS) Communication Fellowship. The Fellowship was established in 2014 to help graduate students gain hands-on science communication experience by interviewing, gathering content for stories, and writing for the CELS website, social media, and newsletter.