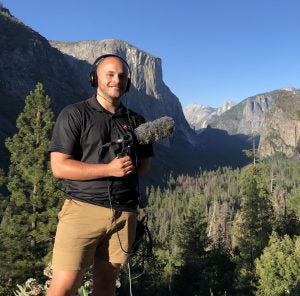 Ezra David Romero understands the struggles of those disproportionately impacted by climate change.

“I grew up in a poor, marginalized community in Northern California’s Central Valley,” says Romero, an environment reporter for CapRadio and an alumnus of Metcalf Institute’s 2019 Annual Science Immersion Workshop for Journalists. “I think that’s why I focus on those communities because I came from there.” The son of Christian missionaries, Romero saw how people lived in the U.S and in other parts of the world and knew he wanted to tell their stories.

He graduated from Fresno State in 2012 with a journalism degree and has spent most of his career covering all aspects of climate change including impacts on the livelihoods of farmworkers and on people forced from their homes by raging wildfires.

Romero had just embarked on a 10-month podcast, TahoeLand, in 2018, investigating how climate change is altering Lake Tahoe, when he applied for Metcalf’s Workshop. The podcast won top honors by the Public Media Journalists Association and a National 2020 Edward R. Murrow Award for digital reporting within the project. He and his team were interviewing dozens of scientists about climate models and projections and needed the tools to interpret and translate that information for their news audience. He also wanted to avoid oversimplifying the data. “The Metcalf Workshop helped me understand how scientists arrive at their conclusions,” says Romero. “I was able to write a stronger piece because of the fellowship.” Romero adds that he continues to reap the benefits of his Metcalf experience. “I use the information I gained from the fellowship almost every day.”

The award-winning journalist enjoys covering what he calls “the nerdiness of climate change” and how environmental decisions affect people. His reporting has covered legislative action on everything from droughts and water shortages to plastics pollution and stories about the direct investment of funds into low-income communities to mitigate climate impacts. His most recent piece focused on the invasion of bark beetles in California forests in the wake of wildfires that burned a third of the state’s giant sequoias.

In his story, Racist Removal of Native Americans in California is Often Missing from the Conversation, Romero explores the consequences of the forcible removal of thousands of indigenous people from California in the mid-19th Century and how this affected wildfires. Native Americans used managed burns to keep wildfires in check for generations. The genocide that killed 16,000 Natives resulted in overgrown forests that provided excess fuel for dangerous wildfires, a situation exacerbated today by climate change. “I wanted to highlight the knowledge of Indigenous people,” says Romero. “I wanted to hear from Native American people and learn their stories.”

Romero’s sights are set on a future project to analyze all aspects of California’s ambitious climate change goals and “create a blueprint” for the best way forward for California. He plans to base his reporting on interviews with scientists, policymakers, and people on the ground to explore the origins of the climate crisis, the gaps in data, and “imagine” what climate reform might look like. “California and the world are facing all of these issues, and there are so many theories and ideas,” he says. “I want to hear what people are doing, highlight the gaps in the data and explore how we get there.”