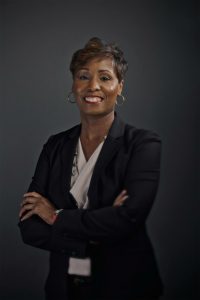 As Dr. Sibrina Collins sat in a dark movie theater watching Black Panther, she viewed the film, which is based on a Marvel comic book character, through the eyes of a scientist. “When I go to the movies, I just can’t turn off my chemistry brain,” says Collins, an inorganic chemist and executive director of the MarBurger STEM Center at Lawrence Technological University in Michigan.

The fictional element Vibranium, that gave the Black Panther his super powers and helped fuel the imaginary nation of Wakanda, captured Collin’s attention. “And I couldn’t stop thinking about where Vibranium would appear on the Periodic Table,” she says.

Collins immediately recognized a unique opportunity to engage students in science and asked a colleague, Professor LaVetta Appleby, to pose a question about Vibranium’s place on the Periodic Table on her next chemistry exam. “If you can make connections to pop culture and these student experiences, that’s a really neat strategy for creating inclusive classroom environments,” says Collins. She referenced the students’ answers in an article she coauthored for the Journal of Chemical Education about the merits of using the film as a teaching tool. “I think just having an image of someone who looks like them is very powerful,” she says. “It’s an example of inclusive science communication.”

Collins used that same approach, almost a decade ago, to get students excited about science in a general chemistry class she taught. “I walked into the class one day and said, ‘the title of this lecture is What’s in Your iPod? Tell me what you listen to,’” she says. “I had them hooked, and I followed up by asking, ‘how does this iPod work?’”

Collins was among the nearly 200 attendees at the 2019 InclusiveSciComm Symposium held at the University of Rhode Island in September. “I absolutely loved it,” says Collins, who presented a poster at the symposium entitled STEM Inclusion: Black Panther, Vibranium and Frankenstein. She especially valued the networking opportunities and workshop sessions focused on developing strategies to create more inclusive classrooms.

In her career, Collins has held teaching positions at the College of Wooster and Claftin University, led graduate diversity and recruitment at the University of Washington, written and edited for the American Association for the Advancement of Science, and served as director of education at the Charles H. Wright Museum of African American History in Detroit.

Now, as head of the Marburger STEM Center, her work focuses on campus-wide STEM initiatives at Lawrence Technological. She’s also focused on engaging more students from underrepresented backgrounds in science. “We need to let them know that STEM plays an important role in their everyday lives,” says Collins. “Even if they decide not to be scientists, they know it’s an option.”