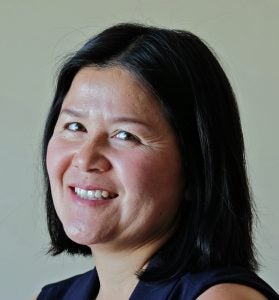 Ngoc Nguyen seeks to highlight the stories and voices of immigrant communities through journalism. “America is a multicultural landscape made of so many diverse backgrounds,” says Nguyen, a Metcalf Institute alumna and Advisory Board member. “We still have a long way to go in newsrooms to reflect this in terms of both people and values.” She is currently the partnerships and ethnic media editor for Kaiser Health News, a national newsroom that produces in-depth journalism about health issues. Nguyen, who was born in Vietnam and came to the U.S. when she was one, is particularly drawn to covering Asian American issues and environmental health. “I strive to tell stories about public and environmental health through the perspective of immigrant communities.”

Covering devastation in the aftermath of Hurricane Katrina represented an important early career step for Nguyen as she reported on the challenges minority communities faced in rebuilding. “Even a year after the storm, residents who had been displaced were still struggling to return to their homes and towns,” she explains. In addition, there was also a push to create a dumping site for large amounts of storm debris in neighborhoods with African-American and Vietnamese families, which residents strongly opposed. “That was the first time I had seen that kind of activism among Asian immigrants, and it was very inspiring,” she states. “Oftentimes these communities of color are fence-line communities, living right next to industrial waste or pollution sites.”

Nguyen also had the opportunity to travel to Korea, Hong Kong, and Vietnam to report on the environment and public health. She describes this experience as a defining moment for her both personally and professionally, recognizing that she “was better able to connect with [her] own cultural background.” Bicycling through villages in Vietnam, she also learned about the long-term consequences of the Vietnam War and its impacts on these people, such as unexploded mines still buried in the ground. When she returned to the U.S., she “became interested in the legacy of Agent Orange exposure on Vietnamese Americans and veterans from this war.” Nguyen worked for a year on an investigative report studying this topic and earned a national journalism award from the Asian American Journalists Association for it. “This hands-on reporting abroad heightened my interest in ethnic media and put me on course to continue striving to be a bridge between ethnic media and mainstream media.”

In 2007, Nguyen’s journey brought her to Metcalf Institute’s Environmental Reporting Fellowship program. “This fellowship was very important in giving me the foothold, skills, and networks to grow as an environmental reporter,” she says. “The Fellowship expanded my knowledge of important scientific disciplines such as marine science and science communication.” It also enabled her to gain hands-on experience as an environment reporting fellow at a prominent regional newspaper, the Sacramento Bee, where she worked with editor Ricardo Sandoval-Palos, who now serves on the Metcalf Institute Advisory Board with her. She also attended and served as a mentor for Metcalf’s 2011 Marine Science Seminar for Journalists.

Nguyen joined Metcalf Institute’s Advisory Board in 2020. “I’m a huge fan of Metcalf’s trainings and programs for scientists and journalists, in addition to the great work they do to foster diversity and inclusion in STEM fields,” Nguyen explains. “This aligns with my ongoing work with ethnic media and health and environment reporting.”

Nguyen looks forward to working with Metcalf to advance diversity and inclusion in the news media and facilitate informed conversations about science and the environment.  “There’s never been a more relevant time to tackle these issues,” she states. “I’m excited to get Metcalf’s work and its valuable resources for journalists onto the radar of ethnic media and journalists of color”, says Nguyen, who serves on the Advisory Board’s promotions committee. “Looking forward, that would be where I’d like to focus.”

Written by Gabriella Placido. She’s in her final year of a URI College of the Environment and Life Sciences (CELS) Communications Fellowship. The Fellowship was established in 2014 to help graduate students gain hands-on science communication experience by interviewing, gathering content for stories, and writing for the CELS website, social media, and newsletter.