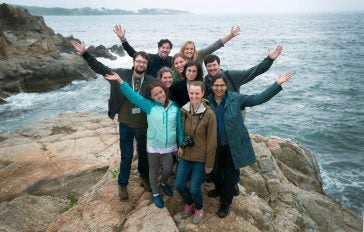 Metcalf Institute awarded fellowships for the 17th Annual Science Immersion Workshop to ten journalists from the U.S., the Philippines, and Canada.  The Fellows, chosen from an unprecedentedly competitive pool of applicants, represented a variety of media organizations including PRI’s The World, the Associated Press, Georgia Public Broadcasting, the Oregonian, and GMA Network in the Philippines.

The 2015 workshop brought journalists into the field, laboratory, and classroom to explore the fundamentals of scientific research and sharpen their investigative reporting skills. Metcalf Fellows explored the impacts of human activities on coastal ecosystems from top scientists at the URI Graduate School of Oceanography, one of the nation’s premier oceanographic research institutions, as well as researchers and policy experts from the National Center for Atmospheric Research, Rutgers University, University of California Santa Barbara, and the University of South Carolina. Fellows discussed community responses to shoreline change and explored the science underlying a range of global change issues such as the effects of “emerging” contaminants on water supplies and seafood safety, new approaches to salt marsh restoration in the face of rapid sea level rise, and long-term changes in food webs of Narragansett Bay – the world’s most-studied estuary.

In addition to donations from Metcalf Institute alumni and other supporters, the 17th Annual Science Immersion Workshop for Journalists was underwritten by generous support from Pamela M. Thye and John Frederick Thye.