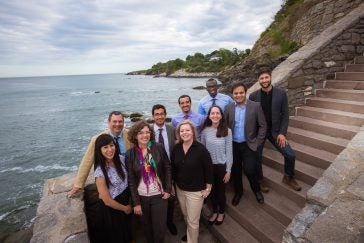 Environment editor Alok Kumar Gupta returned to China Global Television in Beijing ready to tackle a wide range of new stories following Metcalf Institute’s 20th Annual Science Immersion Workshop for Journalists. “The workshop helped me come up with a lot of story ideas related to climate change and coastal revival in developing countries, he said. “I feel much more confident as an environmental reporter. “

Gupta was one of 10 journalists selected to attended Metcalf’s 20th anniversary workshop where fellows trekked through coastal wetlands to see how salt marshes are responding to sea level rise, observed the effects of warming temperatures on marine ecosystems aboard a fisheries trawl, and strengthened the foundation of their scientific understanding through a dizzying variety of field trips and informal interactions with scientists.

The fellows represented news organizations with regional to international audiences and were chosen from an extraordinarily competitive pool of applicants representing 45 nations around the globe.

The weeklong workshop, held June 10-15, 2018, at the University of Rhode Island’s Graduate School of Oceanography, focused on climate change impacts and extreme weather events. The fellows gained hands-on experience from leading scientists who are working to project the effects of climate change, identify ways to plan and respond to these changes, and investigate the most effective ways to communicate those challenges.

The journalists also joined more than 500 attendees at Metcalf’s Annual Public Lecture series. The series explored a wide range of topics including the economic impacts of extreme weather events, local leadership on climate action, and strategies some communities, government agencies and businesses are employing to adapt to climate risks and solutions.

The Metcalf Fellows are already turning their new insights into stories. Read Rosanna Xia’s front page story about sea level rise in California for the Los Angeles Times and listen to David Martin Davies discuss the effects of hurricanes and coastal flooding on his Texas Public Radio call-in show, The Source.

Sebastien Malo, a correspondent with Thomson Reuters Foundation News, noted how the fellowship strengthened his understanding of the relationships between climate change and natural processes. “I also loved learning more about how climate change impacts fisheries. It’s a topic I rarely cover and it gives me tons of reporting ideas.”

“I would describe my Metcalf experience as excellent,” said Melissa Ross, host of First Coast Connect at WJCT in Jacksonville, Florida. “We learned something new every day. It’s been a really deep dive into science.” You can listen to Melissa describe her Metcalf experience here and read more here.

“What I think has been most useful is sitting down one-on-one with scientists and talking to them about how they approach their work, and what they think are the most important aspects of their research for the public to understand,” said Emily Holden, an energy and climate change reporter with Politico.

Trevor Ombija is about to launch a new environmental show at NTV Kenya in Nairobi where he’s a news anchor and reporter. Though the workshop focused on U.S. climate impacts, Ombija’s news audience faces many of the same challenges including climate impacts on coastal fishing communities. “At the end of the day, it’s really a global village and we’re all connected,” said Ombija.

“This experience has changed my entire outlook on covering the environment and climate science,” said Tony Briscoe, a reporter for The Chicago Tribune. “I may have only been in Rhode Island for a week, but the tools I gained during my Metcalf fellowship will stay with me for the entirety of my career. I am incredibly grateful for this opportunity to learn and to help others learn about the pressing issues we face.”

Katie Peikes, a reporter with Delaware Public Media, agreed. “I couldn’t get this experience anywhere else,” she said.