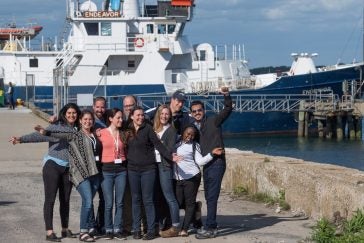 “My head is alive with so many ideas,” said freelance reporter Kate Siber as she headed home after an intensive week at Metcalf Institute’s 18th Annual Science Immersion Workshop for Journalists at the University of Rhode Island Graduate School of Oceanography. She was one of ten Fellows selected to attend the workshop, which took reporters into the field, laboratory and classroom to strengthen their understanding of the scientific process and sharpen their investigative reporting skills. “Right now I’m just so overwhelmed with gratitude that I had this opportunity,” Siber added.

The 2016 Metcalf Fellows were:

The Fellows were chosen from the largest pool of applicants to date and hailed from a variety of media organizations including Marketplace, WHYY, the Dallas Morning News, NBC News, and the Cape Gazette in Delaware. The group also included journalists from Pakistan and Nigeria.

“I now know how to interpret the science for my publication and actually tell audiences the stories they need to hear,” said Doyin Adeoye, reporter for the Nigerian Tribune. “I’m ready to take environment reporting in Africa to a new level.”

The Fellows learned about coastal environmental responses to human activities from GSO scientists; they experienced, first-hand, how researchers conduct field surveys to monitor changing fisheries in Narragansett Bay; they visited salt marshes to observe the effects of sea level rise on coastal wetlands; and they learned about a range of water quality management issues facing coastal communities.

Sessions on science translation gave Fellows tips on reading and translating science journal articles. Participating scientists also gained new skills from the journalists, including how to identify and pitch newsworthy research to journalists

“What I really liked was the exercise of pairing journalists with scientists…so journalists and researchers can share their different perspectives on how they see these stories,” said Susan Phillips, energy and environment reporter for WHYY. “One of the tips I got that I never thought about before was if you’re reading one of those scientific papers, just look in the references and see who they cited, and those are the sources you can call up to ask questions.”

The workshop ran concurrently with Metcalf’s 19th Annual Public Lecture Series, which featured speakers on a range of topics including the potential effects of limiting carbon dioxide emissions on ocean life, policies to address flood risks, and public opinion on climate change. The series concluded with an inspiring talk by the investigative reporter who broke the story about the Flint, Michigan water crisis.

Now the Fellows are back on their beats, ready to put their new insights to work.

“I feel like I’m going back home with a great foundation for reporting on the environment, and I feel a great deal of confidence that I didn’t feel before,” said Jeff Mosier, reporter for the Dallas Morning News. “It was one of the most extraordinary experiences of my life.”